Yesterday (November 8) we left Hawk Mountain and meandered southeast through Pennsylvania.  It was a lovely sunny day and we were looking for good birding spots.  We had not had much luck at Hawk Mountain although the Bed & Breakfast (B&B) where we stayed had a nice feeder that attracted the usual backyard birds.....chickadees, titmice, nuthatches, and cardinals.  But we love the more common yardbirds too and delighted in seeing them flit back and forth gathering seeds from the feeder.  Last night, we had picked up a sandwich at Wannamaker's General Store and brought it back to the B&B for dinner.  Our room was relatively small and there wasn't much on television (all six channels) and, of course, we were in a cellphone and internet dead zone, so we went down to the "common room" to eat. 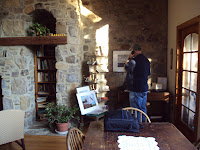 Another guest was there having a couple of Yuenglings (free on tap at the B&B) and we struck up a conversation and had a good little visit.  She was a professor of music at a university in Washington state.  And she too was a birder. She had been on the mountain too and, like us, was a little disappointed that there were so few hawk or eagle sightings. But she was absolutely loving the birds at the feeder. She remarked that the yardbirds here on the east coast were so much more colorful and interesting.  Although I think she may have exaggerated just a little when she said that they only had gulls on the west coast, I did understand her point.  When we visited Arizona last year, we were totally enthralled with the western bluebird and the cactus wrens and the western and pinyon jays and the gila and acorn woodpeckers.  The birds that were common there were new to us and so we found them to be very interesting. So our new birding friend, Donna, was completely enjoying every little chickadee while she regaled us with whale tales and gull stories from the Seattle and the Pacific Northwest.

We meet Donna again at breakfast - again a hearty one and got directions to Lake Ontelaunee from Jim, the innkeeper.  Donna was headed to Lancaster to see if she could see an Amish wedding. She had heard that there were lots of weddings in November since the Amish waited until after harvest for such social events.  Jim warned that there might not be much action at the Lake since he had heard the state was working on the road over the dam.  And he was right. We hit our first traffic jam of the trip right there at Lake Ontelaunee on the dam.  The lake was nice and there was a good flock of Canada geese near the dam but not many other birds.  I am not surprised since the noise from the roadwork might have discouraged any migrating birds from stopping there.  Jerry did spot a small stubby tailed duck near the geese that might have been a ruddy duck or a grebe but the little guy disappeared into the flock of geese before we could get a good scope on him.  So we were soon back on our way south looking for the Middle Creek Wildlife Management Area (WMA). 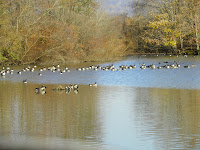 We plugged the address for Middle Creek into the GPS and found ourselves taking the long way which is usually the scenic route so that suited us just fine. We meandered through towns small and medium sized and just when we were convinced we were pretty much lost, there was the road leading out through the fields to the visitor center.  There are several impoundment ponds along the road and it was there that we found the first birds of note in any numbers although there weren't really too many.  There were Canada geese (of course), American black ducks, mallards, egrets, some grebes, cormorants, crows, and in the distance on one of the ponds, a great bearded heron.  We also spotted a northern shoveler and that was a treat.  We stopped in at the visitor center for a restroom break and to get some information. We were lucky on our first quest - this sanctuary had running water and so we did not have to use the composting toilets like the ones at Hawk Mountain.  Now I am all for composting toilets and saving water and all those good things but I am also in favor of plain ole white porcelain toilets with running water.  But I have to applaud the concept of building what amounts to outdoor toilets on the inside at the visitor center at Hawk Mountain...and it beats the heck out of the outdoor stinky porta-potties everywhere else. 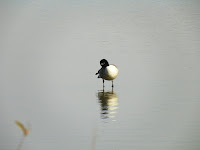 Now where was I? Oh yeah. We did not have any luck getting information at the desk at Middle Creek. Oh, there was a ranger there but he was busy chatting with a couple about hunting and whatever else and, although we stood there politely for some minutes, the ranger and the couple pretty much ignored us.  So we grabbed a trail map and left.  I figured it wasn't worth getting crazy about or interrupting their conversation and it was so much nicer outside walking around that waiting in the center for the ranger to get back to his job and stop bs'ing with his buddies.  Which brings up another point while I am grousing.

Why is it that sanctuaries and refuges cater so much to hunters? I do understand the part that hunters play in helping to thin the deer herds although a few good wolves could do that too.  And I understand that hunters help support the refuges and sanctuaries by buying deer and duck stamps but it seems that every fall when the migrating birds return to the area and it is the best time for birding, the refuges become the domain for hunters and hunters only.  The trails are roped off and the roads blocked to facilitate hunters and keep birders and walkers and hikers out. Yes, I know it is best that walkers and hikers stay off the trails when there are people with guns, some of whom are willing to shoot at anything that moves. But wouldn't it be nice if there were limited days during hunting season that were set aside for walkers and hikers?  I wouldn't mind having a bit longer hunting season if some days were set aside strictly for birders...say, hunters could hunt on Friday and Saturday but Sundays were set aside strictly for birders and other nature lovers.  I am being generous in giving the hunters two days out of three on the weekend considering they get the whole week otherwise for hunting during the season.  And it is my experience that most men who hunt do find reasons to take off work so they can hunt during the week during the season.  Do not think to remind me that hunting season is only for a couple of weeks because you would be wrong.  Deer season with a rifle may only go for a few weeks but then there is bow season and black powder season and there is duck season and raccoon season and beaver season and dove season and quail season and rabbit season and squirrel season.  I checked the hunting season calendar at North Carolina Wildlife and there is some kind of hunting season going on all the way from October through March.  Now that is a long time for the sanctuary roads to be blocked off and the walking trails to be closed just to keep the walkers and birders from being shot by a hunter.  So why do the refuges and parks cater so much to hunters?   Hmm. That is probably a blog for another day. 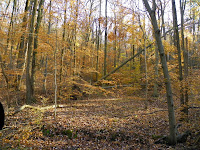 So we didn't get any information from the park ranger but we did get a trail map and talked to a friendly visitor outside the center.  No, he didn't know of anyplace nearby where we could get something to eat and he thought most of the roads through the WMA were blocked off for the hunters. We decided to drive around a bit and see what we could find anyway.  We elected not to walk on any of the trails today - no need to get shot at on such a beautiful day and we did not have any bright orange vests available to wear.  We birded the impound ponds and drove through the woods around one of the larger ponds.  It was a lovely drive through the hardwood trees still covered with golden yellow leaves.  Most of the red leaves had turned brown and were falling softly to the forest floor.  It was like driving through a covered tunnel of pure golden sunlight.  It was peaceful and quiet as we were the only ones on the road today.  We did see a fisherman down by the pond but otherwise, we had the road to ourselves. 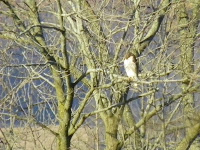 As we came back out of the woods and headed through the farmer's fields, we came across a hedge that was bustling with birds. We stopped and were delighted to see numerous blue jays, a couple woodpeckers, and an eastern bluebird. What a treat!  As we drove on we spotted a red-tailed hawk sitting at the top of a tree, no doubt, master of all that he could see.  We scoped him out and got a couple of blurry pictures.  It was a nice last look at the refuge and we headed on back to the main road.  It was getting late and we were hungry.  After a stop at the Gin Mill in Lebanon for a late lunch, we headed to the turnpike and drove thirty-six miles to the highway that would take us south in to Delaware.  We stopped at a Comfort Inn and, luxury of luxuries, we were soon ensconced in a comfortable room with all the amenities and ordered a pizza for dinner.  We were totally beat but, by crackety, we were back in civilization and out of the dead zone - we had internet and cable TV.  What more could a couple of tired old naturalists want after a long day in the woods?
Posted by Joannie Girl (J-Girl for short) at 11:31 AM