Our hummingbirds are back.  I say "our" because we've had two (boo hoo, only two) hummingbirds to spend the summer with us for the past few summers.  A male we have named "Buster" and a petite female we call "Little Bit".  Unfortunately, they are not the least bit interested in each other and appear to be sworn enemies.  Each has claimed the feeder we hang off the back deck as his/her own.  And each guards it vehemently.  A couple years ago, I hung two feeders on either side of the deck assuming that the fight would end and each would have a feeder to call his/her own.  But that didn't work.  That year, the female laid claim to both of the feeders. She found a perch in the oak tree that allowed her to see both feeders and she attacked any creature, large or small, who dared to taste the sugar water for themselves.  I finally took one feeder down - neither hummingbird seemed to be in a sharing mood.  This year Buster seems to have the edge.  He sits up in the tree and comes zooming down like a bat outta hell if Little Bit so much as flies by the feeder. I have seen her slip in and catch a quick drink but she swiftly flies away at his approach.  Having seen these two birds have at it and dive bomb each other and tussle all the way to the ground, I find myself wondering about their ferocity.  Do you suppose God made hummingbirds fierce because they are so small or did He make them small because they are so fierce?
Guess that is a question for the hereafter. 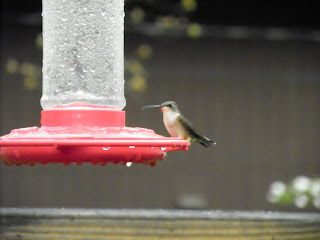 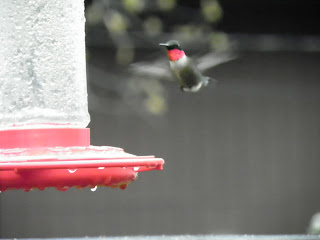